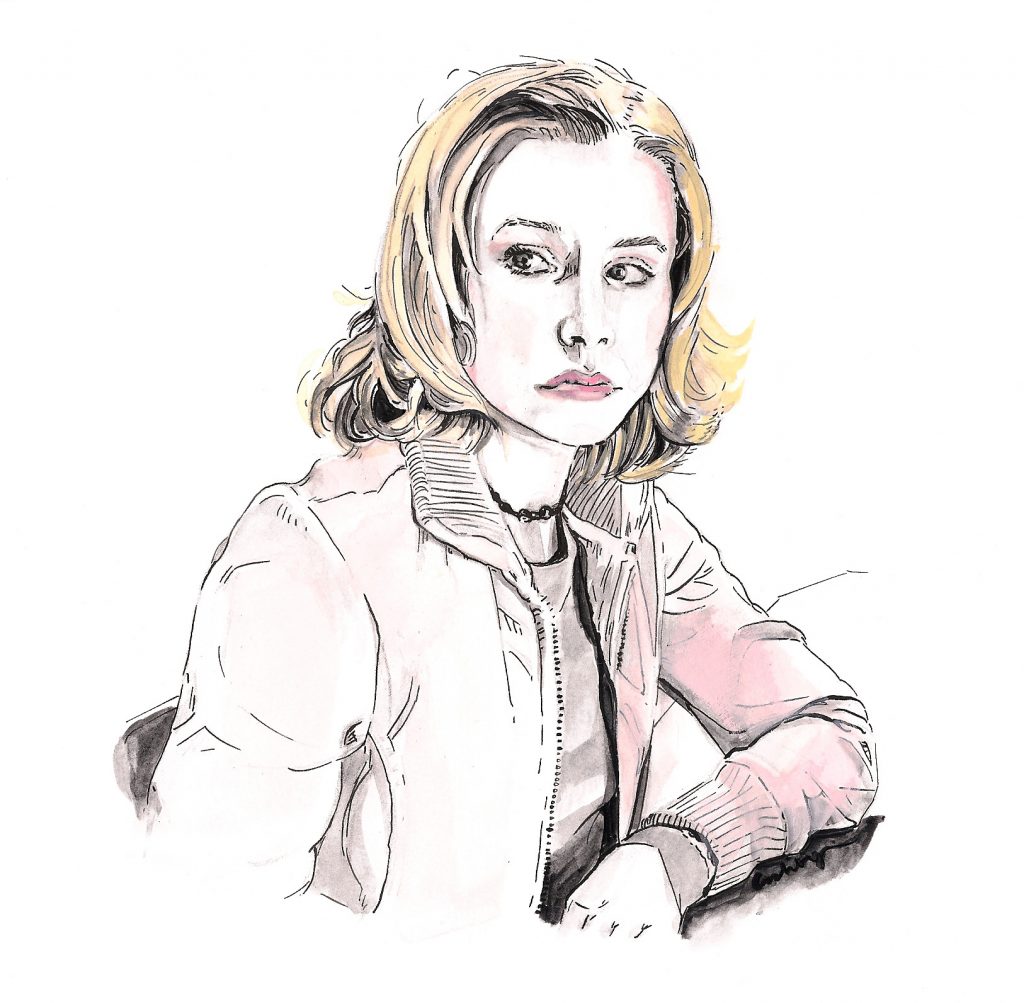 illustration by Brianna Ashby I was a child and then I was a girl.

The abrupt farewell to those hideous boys department cargo pants that zipped off into shorts and the cotton candy scented cloud that became omnipresent around me were symptoms of (but not the cause for) this change. I was a thirteen-year-old girl when my best friend and I spent an entire summer hiding in the bushes behind her house and watching, with a giddy fascination that lived close to fear, the teenage boys next door shoot each other with water guns and fall dramatically into the pool, playing dead in burgeoning bodies and neon board shorts. I was a thirteen-year-old girl when I read The House of Mirth and when I went through my Katharine Hepburn phase and when I had my first kiss during a game of manhunt with a friend’s older brother who was wearing a “YANKEES SUCK” t-shirt. I was a fourteen-year-old girl in a mixed grade high school gym class—stunned and mesmerized by the senior girls chatting naked in the locker room with wet hair—when I decided to buy a ridiculous bra. I was a fifteen-year-old girl when I won my first student journalism prize and when a boy held my hand even though we were both clammy and wrinkled from swim practice. I was a sixteen-year-old girl when I stayed up all night after a dance saying things about always; when I learned to drive; when I wrote terrible poetry about romantic bruises and bleeding hearts. I was a seventeen-year-old girl when I smoked my first cigarette, hand-rolled by a guy with a goatee at my first real college party, watching the city from a rooftop and pretending not to worry that I wasn’t excited, and I was an eighteen-year-old girl when I had to come home. I was a nineteen-year-old girl the first time I cried on a public bus. But I was a nineteen-year-old girl, too—and older, younger—was a series of girls with the same bangs—when I laughed so hard and loved so much leaning out a car window that it felt like I’d forgotten everything I had ever learned, like it had swirled in me so long that now my body was made of what had been broken, and I was different, but not new. Stronger, but not smarter.

Before any of this, I met Veronica Mars.

The show’s first season is the most important season, unless the system by which you measure importance is based on how many of the episodes include Logan and Veronica kissing. In this case, and no other, season three would win. (As it happens, that is the type of system I used at fifteen.) In any case, the first season is about searching for the truth, even while the world around you runs happily on lies. It revolves around Veronica’s desperate mission to uncover the truth about her best friend Lilly Kane’s murder. I use the word “desperate” to imply extreme intensity; I do not use it to imply the shaking hands and scattered speech—the tear-soaked neediness—we often mean when we say “desperate.” Even in the throes of despair, Veronica Mars is not desperate. She’s quick, smooth, a step ahead.

In addition to Lilly’s murder, Veronica is searching for the truth about her own rape. She is tracking down her mother, who ran away. And, in her obviously ample spare time, she’s solving other people’s mysteries for monetary gain and friendship points. There is a quality to Veronica that resembles the shark who can’t stop swimming or it will drown. There is a fragility in her doggedness that is as clear to me today as it was invisible in 2004. There is a trick to racing one step ahead of your own trauma. There is the high of finding all the answers and the crash when it means there is nowhere left to run.

I watched the first episode of Veronica Mars in my bedroom on a Wednesday night while doing eighth-grade social studies homework. I was twelve. I was a baby raised with a TV Guide in hand, and television has always been important to me in a manner intense and earnest and probably a little strange. I have a bond with that blue light—it keeps me warm. I might preface the statement I am about to make with something like, “I don’t tend toward hyperbole, but–” …except that I do, and except that it isn’t, truly, hyperbole: Veronica Mars changed my life. Veronica Mars came to me witty and wanting and brave at a time when I needed that most. Veronica Mars came to me when I was only beginning to become, and she helped shape who I would be.

There is what Veronica Mars was to me then and there is what she would become to me later. Those first feelings aren’t to be discounted—the fervid praises of AOL Instant Messenger user marsinvestigationsx317—but their importance is tempered by the fact that I was, at that point in my life, dedicating most of my time to begging my mother to let me wax my eyebrows and secretly (ashamedly) reading my old Baby-Sitter’s Club books. I was a kid and Veronica was a superhero. I felt the power of her fury, and I knew right away that I wanted to find that in myself, but I did not yet know what it was to hunger for the truth. All my stories were simple then, and no one yet had tried to contradict them. I loved Veronica, but I couldn’t really know her.

I liked Veronica Mars when I was twelve because she was funny. She was cool, but not, like, cool cool. Not like she was trying or like she’d be mean to you at the mall. These days, I’m something close to an adult, and I still like her for that. She’s sharp and quick and smirking. She knows how to protect herself and how to fight back when that fails. I didn’t know about defense mechanisms back then; I played pee wee soccer. Sometimes I think that what I love most about Veronica is the way her pain is never written so as to break or better her, but rather as a part of her, as a change to be weathered. A factor, but not the final fact in her identity. We don’t get trauma as a “teaching moment” here.

It would be nice if what I liked best about Veronica Mars were her quips and the hilariously bad flashback wig they stick Kristen Bell in sometimes. I’d like to like that best, but I can’t tell a story that’s not mine. In the face of horrors, Veronica got hard—got tough—and she wanted to get even because she believed that was possible. She didn’t know any better then, at sixteen. If the killer walks free and the lies torpedo what you know and what you say, if wrong wins—it is in moments like those that Veronica Mars taught me to keep going, to stand up straight, to be brave for your own sake and your own story. She also taught me that sometimes you have to make out with your dead best friend’s ex-boyfriend a lot even though he is a noted Terrible Dude, but, I mean, not all of life’s lessons can be inspirational office poster material. And, besides, nearly a decade of life, several heartbreaks wreaking varying degrees of mess and destruction, a revolving door of bad boys with—no, I swear—good hearts, a million drunken tears, and many hours of therapy all have yet to turn me into the sort of person who doesn’t love “obligatory psychotic jackass” Logan Echolls with every fiber of my being—so, no judgment, V. If anything, it’s sort of a comfort to know that I am not the only otherwise smart and self-assured woman over whom calamitous Logan and his sad, sad eyes have some incorruptible psychosexual hold.

There are journals, years of secrets, and they are mine but they do not speak with one voice. There are hearts of hurt, filled up in turn with what was and what wasn’t, and even if I claim them all and bear the weight I cannot recite it back so it makes sense. It feels, sometimes, like I stand so far from where I started, like I have labored over infinite wanderings, but any sense of reason proves that isn’t true at all. It has been barely any time at all, and the difference of these ten years will make no blip on any timeline but the one I keep for myself. It feels so long because I worry over the details. It feels so long because: all that was good and all that was bad (and all that was good and turned bad)? I want to keep it. I have to keep it.

A boy in a raincoat called me an emotional hoarder once while his back made puddles in my bed. “You always have to know everything about everything, like the world is going to fall apart if you forget.” He was right about that, and probably other things, too. If it’s a character flaw, I’ll stomach that, it’s okay. I don’t need to be easy, but I need, always, to know.

Inside fear I won’t admit to, I wonder what I’ve ever learned; standing under the improbable light of day, I know with every movement that lessons have reshaped my bones and spiraled through the marrow. What you’ve done, you carry—not a punishment, just a life. What was done to you, you contain, too—not as a cancer to corrupt or to overcome, but as a new piece, another fact in the tale.

Time is weird. I haven’t even used up that much of it, and still the mess feels like it could fill up a forever. I do the work of ironing the kinks from my history, I line it up, I say, “I was there.” I’d have to do this anyway—we all do, to find something we can call the truth and some way to face it—but now I do it guided by a fictional TV heroine. It’s not What Would Veronica Mars Do?, exactly, but How Would Veronica Mars Do It?. I want to make her intensity a part of me (but she and 2004 can keep all the choker necklaces).

While Veronica Mars never quite caught on ratings-wise, it did amass a dedicated cult following. Last week, nearly ten years after it premiered on TV, Veronica Mars is back by way of a Kickstarter-funded feature film. When I see the movie, I won’t be alone. I will bring with me every girl I’ve been so far, every girl who loved Veronica and every girl Veronica was there for when she needed to heal or laugh or just fill a Tuesday afternoon when she skipped class because life is hard and it was raining. I will eat Twizzlers and I will definitely cry, and I’ll be every girl I ever was, even twelve-year-old marsinvestigationsx317.

Though I did finally get my eyebrows fixed.

Tess McGeer wrote the screenplay for a teen vampire comedy as her major senior project last year. Unbelievably, the degree this earned has not translated to a slew of lucrative job opportunities. It’s okay, though, because her childhood bedroom in Massachusetts is as good a place as any to re-read Judy Blume books and shop for nail polish online.