Issue 12: The End of the World 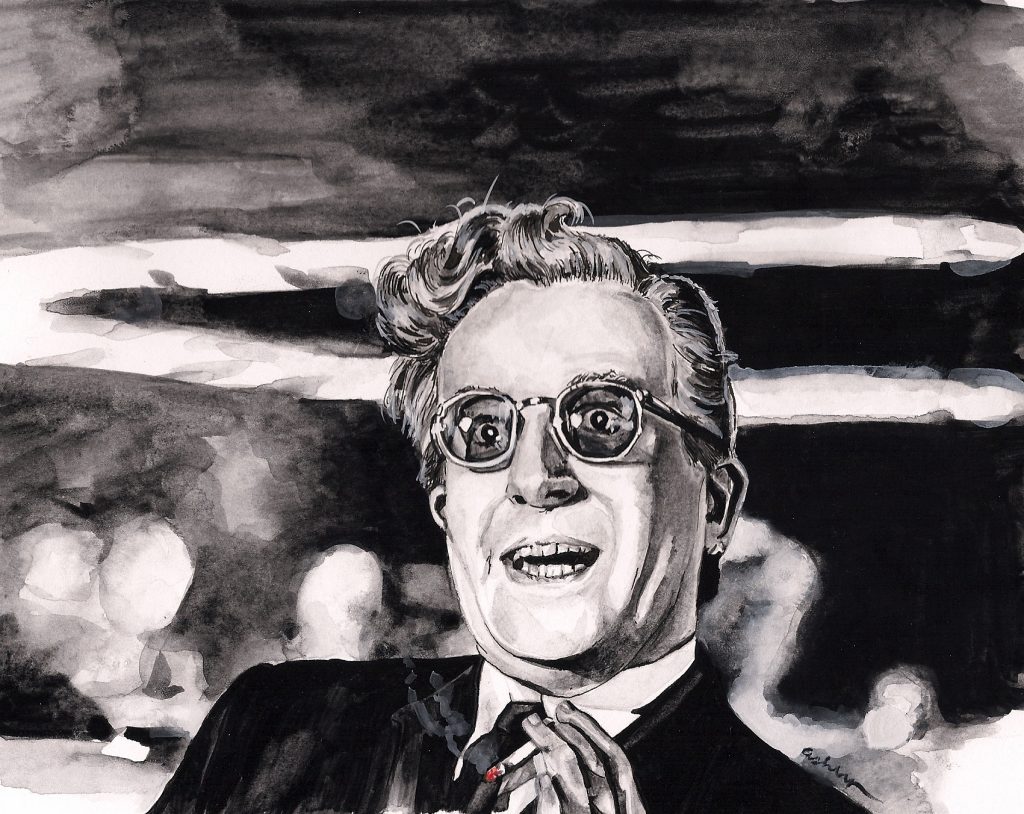 It had been a long, tough day for Dimitri. Cold as usual. A blistering sort of cold that made you feel like your blood would freeze over just thinking about it. He was tired. So very tired. As premier of the Soviet Union, he was always tired, but this night in particular he was recovering from an all-night session with his mistress, the beautiful Marina. She serviced him well, of course, but even with her uncanny ability to pleasure him in the worst of times, his mind still drifted to dusty corners where only one face appeared.

He could still see it now: the dome of his shiny scalp, his magnified eyes pools of calm reserve and preternatural acuity. Dimitri had only met President Merkin Muffley in person once or twice, but still. There it was: his face, emblazoned on the lids of his eyes every time he closed them. The American president’s silhouette danced before him even as Marina’s plump lips trailed down the bare strip of chest exposed by his open button-down shirt in the wee hours of the morning, a late-night, early-morning surprise.

“Stop,” he said, just before she unbuttoned his pants. He felt her fingers pause, their manicured tips poised and ready. She looked up at him with wide, inquisitive eyes.

“What?” she asked, her St. Petersburg accent tinging her words with a Western drawl, one he hated bitterly. The ends of her peroxide hair frayed around her face in wisps, amplifying her doll-like features. “What is wrong?”

“I cannot,” he said. His eyes drifted up to the ceiling. He couldn’t meet her gaze. Despite their bond, so often satisfying in so many ways, he knew he did not respect her. “I cannot, Marina.”

Her hand fell limp on his crotch. “What is this? What are you doing?” Every time she spoke, he hated her more.

“I can help?” she asked, tentatively. She began to unbutton his pants again but he swatted her hand away.

“Get out!” he yelled as he bolted upright, surprising himself with the vigor in his voice. For although he felt weak and feeble and desperate inside, the anger with himself, at this situation, was still at hand. “Get out, Marina! I cannot stand to see you anymore!”

Marina stood up, erect with anger and frustration. She snatched her robe and undergarments off the floor hastily.

“Get out, or I will throw you out!” he shouted, his voice reaching a higher pitch. He turned away towards the bar, poured himself a tumbler of vodka and swigged it down.

He heard the door slam behind him as he helped himself to another shot. His thoughts drifted to his colleague, Alexei, the Russian ambassador to the United States. An imposing gentleman with a taste for sweets. A man so close to his beloved, right this very second. A place he could not be.

His brain felt cloudy. This Cold War. So cold that other bodies couldn’t provide warmth. A stand-off, a frozen state. What was any of it good for? Power struggles helped nobody. But the Soviet Republic had to triumph. It had to be an example. And yet, and yet…

He tossed back the second shot and went back for another. And another. And another after that. But despite feeling numb, he could not erase that face from his mind. The only person in the world he would like to talk to was not there. He remembered their periodic chats with a fondness he had never felt before. Each phone call lasted at least a half-hour but it felt like it lasted for ten hours or five seconds. And each time it was never enough.

Out of the corner of his eye, he noticed the record player, gilded and golden in the corner of the ornate bedroom. He fumbled through a stack of records until he came to the only disc that would help the pain.

He thought of the Doomsday device. It would be so brilliant and perhaps his beloved would be surprised. Oh, how he loved surprises. Demonstrating this ingenious feat of engineering—yes, world-destroying, but perhaps peace-keeping?—would surely make the President of the United States stand up and take notice.

He began to sing along with the record. Once it ended, he skipped the needle back again and turned up the volume.

The phone rang. Alexei! Alexei began speaking quickly. Something about the president, something about planes. His brain was too muddled to comprehend the words. And then, before he knew it, the phone transferred to the American president.

“Hello?” he asked. He felt his heart skip as he heard the flat monotone voice on the other end of the line.

“Hello? Hello, Dimitri? Listen. I can’t hear too well. Do you suppose you could turn the music down just a little?”

“Oh, yes,” Dimitri mumbled. “Yes, of course.” He flipped off the sound and felt his cheeks blush with embarrassment. The Shangri-La’s, while terrific, were not the musical choice of a Soviet Premier.

“Fine, I can hear you now, Dimitri. Clear and plain and coming through fine.”

“You, also, are coming through fine.”

“Well, then, as you say we are both coming through fine. Good. Well, it’s good that you’re fine and I’m fine.”

Dimitri clutched the cord of the phone close to his chest, twisting it in circles around his fingers. “It’s great to be fine,” he said stupidly.

“I agree with you, it’s great to be fine.” The president laughed feebly. Dimitri knew this was not a friendly call. He felt something coming up. The president never called out of the blue, no matter how hard he wished for it.

“Now, then, Dimitri,” the president continued. “You know how we’ve always talked about the possibility of something going wrong with the bomb.”

Dimitri, halfway shirtless, sipping slowly on a glass of vodka, listened to the American president tell him about a crazy general subverting the chain of command, ordering air bombers to attack several Soviet cities. His stomach sank.

“I can’t…” Dimitri started. “How can you… How am I supposed to…” He started several sentences, but he could not find the words.

This was the worst possible thing Dimitri could have been told at this point in time. “What do you mean?” he asked, his voice shaky, slurred. “Do you mean you do not like talking to me?”

“So this is not a friendly call, then.” Dimitri ran a hand through his graying hair and stared at his palm.

This one sentence sobered him up. He had to stop thinking like a childish schoolboy with a ridiculous crush. They began to make plans, strategic decisions. Something to fix this situation, to bring them closer.

“I must say that I am sorrier. This device…” He trailed off, felt his stomach churn the vodka.

Dimitri hung up the phone and released a dormant sigh. It may very well be his last day on earth, but he felt oddly relieved. He shuffled over to his bed and flopped down face first, his head smashing itself into an overstuffed pillow.

He slept soundly for the first time in years.

Michelle Said was one of the original founding editors of Bright Wall/Dark Room, and later served as media director and podcast host. She currently freelances and works on her novel in New York.