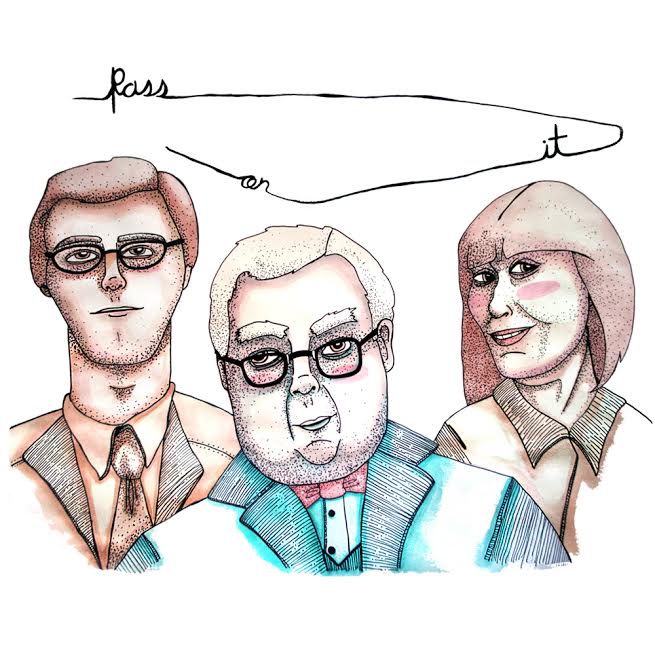 illustration by Liliana VeraIn 2009, I was in Scotland and it was dark outside. This is a thing that happens in the north in the autumn, more and more often until sundown swings back the other direction just as unreasonably. Or so I trust—I left in December, so this is based on conjecture and hearsay.

On this particular night, all the serious students I shared a flat with were studying, but I, being abroad for the semester, was taking only pass/fail first-year courses with names like Celtic Civilisations and Conceptualising Scotland (there were bins at customs where Americans could discard their z’s in exchange for extra s’s). So, alone with a free evening—and having just discovered the BBC’s online streaming service—I decided to watch a film they were featuring called The History Boys. I was unaware that just across the street in the neighboring student flats, one of my new friends was also taking a chance on that night’s featured film. We discovered what we had done the following day, and talked about it over an entire pot of Earl Grey.

Like my soon-to-be cross-Atlantic friendship, The History Boys would exhibit remarkable staying power. Every once in a deep cobalt moon I’ll watch a film without any underlying motivations or prior preconceptions, but only one of those films has ever inspired me to take up the charge and urge other people to watch it, time and time (and time and time) again.

I start with a pitch. Something like: The History Boys began life as a play by Alan Bennett, racking up acclaim and selling out shows the world over, before finally being turned into a film with its original London cast. It’s set in Yorkshire in the mid-1980s, anchored around a group of bright British schoolboys who are being encouraged to stay on for an extra term in order to “try for Oxbridge.” To bolster their chances for admittance—and the esteem that would fall upon his school as a result—the squirrelly headmaster decides to bring in a new young teacher (Stephen Campbell Moore) to coach the boys, alongside their long-time General Studies teacher (Richard Griffiths), and their wonderfully dry history teacher (Frances de la Tour), who gets most of the best lines.

Support team assembled, the boys get to work preparing for a really crunchy entrance exam, all while navigating questions of academic integrity, young love, old show tunes, the lasting resonance of poetry, and a whole squirmy range of inappropriate student-teacher relationships. It’s heartbreaking, but somehow, it’s also a comedy. It shouldn’t work, and yet it does. Remember, this film comes from a land that will try to serve you a dish called “bubble and squeak”—at some point, you just have to trust. In the case of bubble and squeak, you’ll get a delicious fried mess of left-over roasted vegetables. In the case of The History Boys, though, you’ll get a movie that just might take up permanent residence in your heart.

I am a good acolyte. I have seduced subsequent friends into this cult of academe at the rate of at least one-per-year for the past five years. I’ve collected the movies and songs and poems that weave through this film like beads on a string, counting off a rosary of Auden, Ella Fitzgerald, Brief Encounter. At one point I even drafted up ballots comparing The History Boys to a somewhat similar British play-to-film tale, Another Country—though as one convert remarked, “in the battle between Colin Firth’s hair and Russell Tovey’s ears, we all win.” Indeed.

I’ve championed this movie ever since that first night in Edinburgh, but my fondness for it is rooted even further back, twined deep into my past. You see, when I was the same age as the History Boys, my life was not so very different.

The truth of this rang bell-clear when I finally showed The History Boys to an old friend from high school. We were both living back home in Washington state, casting about for what we should do next, trying to fashion lives outside of the academic world we’d both lived in for so long. In a fit of inspired counter-productivity, we house-sat for our old high school English teacher and his wife, making white rose tea and huddling under piles of blankets in their log cabin, watching The History Boys.

It had been nearly six years since we were in AP English together, a class led by the teacher whose sofa we were now sitting on, the man who once invented for us, his favorite class, an absurd and exhilarating quote-memorization game we called Literary Dodgeball. Our class was already close, and by our senior year, just like the History Boys, we moved within a world of shared knowledge, alingua franca of books, plays, poetry, and films that peppered our speech. We acted out scenes in the front of the classroom, worked on projects secretly and then gave them to each other like gifts. We strove to get into good colleges, wondering how to impress, how to stay truthful. My long affection for The History Boys never made more sense to me than in that moment, as I sat watching it alongside another student from that weird and beautiful class, a friend who felt that same sweet leap in her heart when one of the characters alluded to Matthew Arnold’s “Dover Beach,” one of our teacher’s favorite poems.

Every time I sit down to re-watch The History Boys, either with others or on my own, there comes this moment right before it starts when I worry that my love for it might have faded, that what I once found so resonant will now feel hollow, that I might simply have outgrown it. But each time, it still knocks my heart asunder. And so again I’m left wondering, as I’ve wondered now for years, how much this has to do not only with me and my own history, but with the group of actors onscreen. They were together for such a long time—hundreds of runs of the play—before their living relationships were encased forever on film. There’s an amber-like quality to the movie, a preservation of a real and deep familiarity between people who truly have spent countless hours playing in a classroom together. There’s a certain magic there, and it lends a sense of real, lived-in life to these characters, beautiful and sometimes aching in its intensity.

There’s the boisterous Timms (James Corden), happy to poke something (or someone) just to see what will happen; Rudge the rugby player (Tovey), who sticks out as much as his endearing ears; the phenomenal Mrs. Lintott (de la Tour), the wisest of them all—tell it like it is, Totts. Hector (Griffiths): learned, beloved, romantic, immoral. Irwin (Campbell Moore), whose earnest and careful personal life runs oddly counter to his academic credo of making a sensation above all, even strict factuality. Scripps, oh Scripps (Jamie Parker)—confidante of all, simultaneously wry and wholehearted, irreverent and devout. That rascal Dakin (Dominic Cooper), clever and bold as they come, winding his way through life one cock-browed smirk at a time. And Posner (Samuel Barnett), sweet, sensitive Pos, who wears his tender heart pinned brave and innocent on his sleeve, as he simply cannot fathom anywhere else to put it.

The boys are vivid. Quick-witted and charming, with a sort of unified unruliness. Like their teachers, I watch them feeling grateful and hopeful and sad all at once, an almost bittersweet nostalgia. It’s not something I would have guessed I’d keep coming back to, that particular pang of the past, those old dreams.

“Oh Pos,” Scripps sighs, “with your spaniel heart. It will pass.”

“Who says I want it to pass?” Posner responds. “But the pain, the pain.”

Like any film, the world ofThe History Boys is not quite real, but contemporary neuroscience, with its flair for the casually catastrophic, would say that many of our recollections are barely any more true. Still, what our movies and our memories make us feel—the warmth and the hurt—that’s the realest thing we can ever know. That’s what matters. That’s what we carry forward.

And, as Scripps reminds us, “That’s the only education worth having.”

So…does anybody want to watch The History Boys with me?

Tarra Martin has worked as a cooking show producer, podcast host, theater management assistant, barista, and writer. She is currently in the process of moving from NYC to Portland, OR, to pursue her interest in trees.