A Little Willingness to See 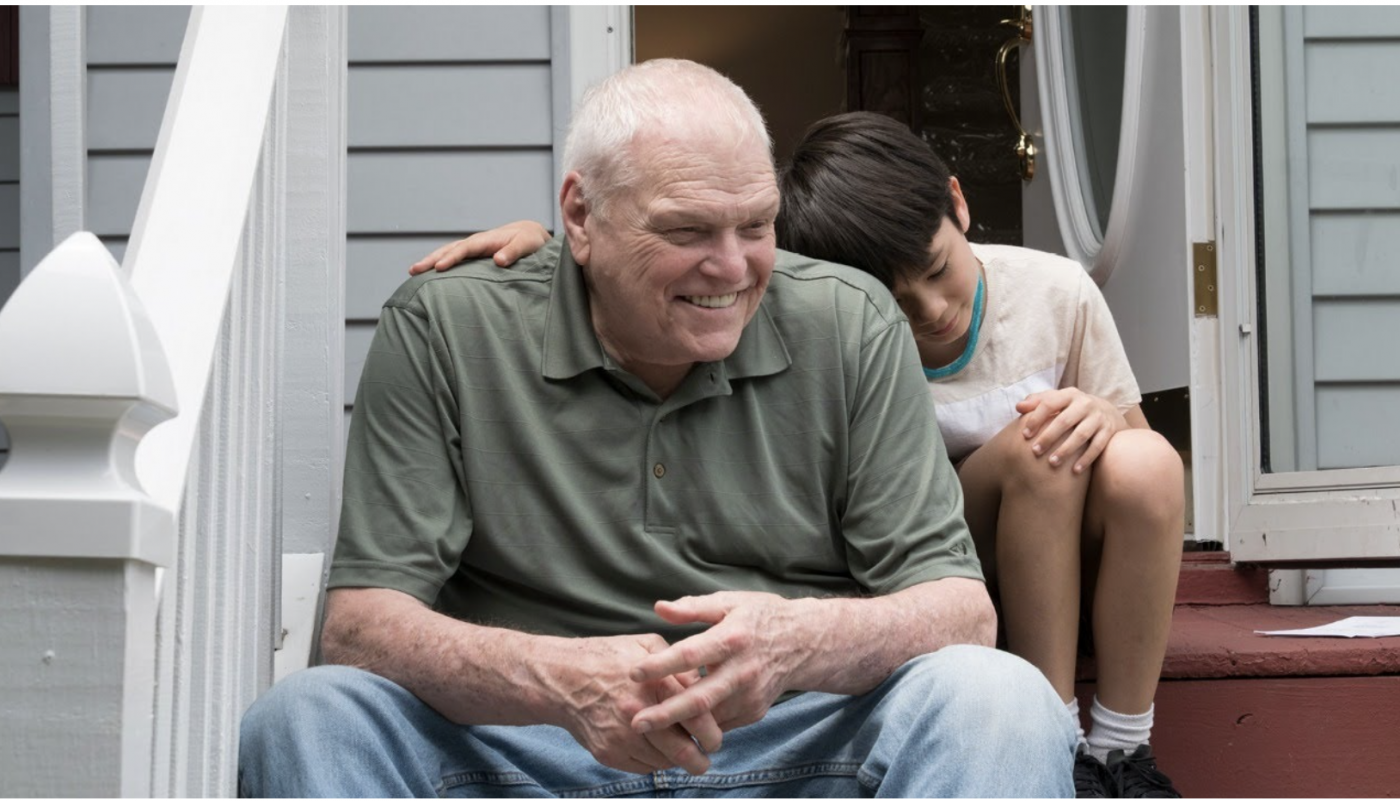 “Wherever you turn your eyes the world can shine like transfiguration. You don’t have to bring a thing to it except a little willingness to see. Only, who could have the courage to see it?”

Andrew Ahn’s Driveways is a difficult film to pin down, precisely because there’s so little in it to process, demystify, or explain. There are no set pieces or battle scenes, no dramatic plot twists or betrayals. Nobody falls in love, nobody has their heart broken, nobody yells or screams or storms out of the house and drives across the country to rediscover themselves. Instead, Driveways captures life in its simplest, most ordinary forms.

After her sister April dies, Kathy (Hong Chau) and her young son, Cody (Lucas Jaye), arrive to clean out April’s house and put it up for sale. They open the door to find the home crammed floor-to-ceiling with all the possessions April ever owned, plus a dead cat in the bathroom. Packing everything up becomes a virtually impossible task, made heavier by some measure of grief and resentment. As Kathy sets about piling things into cardboard boxes, Cody wanders next door and strikes up a conversation with a Korean War veteran named Del (Brian Dennehy), who spends most mornings sitting alone on his porch.

The film proceeds like this for most of its duration: Kathy balancing work, cleaning, and single motherhood, while Cody and Del tiptoe around a developing friendship. Cody is sensitive and anxious, prone to throwing up in unfamiliar social situations, the kind of kid who finds it easier to befriend adults than other children. Del is standoffish, a widower who spends his time playing bingo at the VFW lodge or sitting alone at home. Their friendship comes in fits and starts; they are brought together less by any particular connection or commonality than by their mutual loneliness. Both Del and Cody exist on the periphery of life—one old, one young, each overlooked and left behind in his own way.

Driveways is deeply kind in the space and screen time it gives to these people perpetually on the periphery—the awkward kid, the widower, the single mother, the aging veterans at the VFW. Ahn takes his time, setting up each shot deliberately and simply. Del, Cody, and Kathy’s actions are so ordinary, and the emotions they experience so familiar as to be almost painful, made more so by the gentle vulnerability imbued into each frame. The attentive but quiet camera rests with each character, patiently observing the microwave meal that Del eats alone at his dining room table, the slump of Kathy’s shoulders as she cleans box after box out of her sister’s house. It urges us to take notice of these mundane rituals and the heaviness behind them. In directing our attention to them, it invites us to approach these seemingly unimportant moments—and those whose lives they fill—as inherently worthy of being seen.

This assertion winds its way through Driveways. It stitches together the commonplace with the consecrated, suggesting that perhaps the only real difference between the two is the attention we afford them.

If Driveways was the film that most emotionally impacted me last year, then Marilynne Robinson’s Gilead did the same in novel form. I’m not sure why I associate these two pieces of art with each other. Perhaps because they carried me through the exhausting mess that was 2020, prevented a certain numbness, probed the deeper parts of my soul. Perhaps because both are quiet and spacious, in their own way, leaving room to weave my own half-finished thoughts in and around them.

Although Robinson wrote her Pulitzer Prize-winning epistolary novel a decade and a half before Driveways was made, the two share some important attributes. Certainly, they tell stories different in place, time, and theme: the former is a Calvinist exploration of grace, forgiveness, and faith, while the latter is a simpler tale about kindness. Gilead wades through complex, and at times unanswerable, theological questions; Driveways retains a more human scope.

But both novel and film evince a quiet graciousness, imbuing their characters and their problems with dignity, however unimportant they may feel. Both are concerned with mortality and the way it makes you look at the world differently. And both are structured as a conversation of sorts—one in letters, the other in quiet talks on the porch—between a man at the end of his life and a boy at the beginning of his.

Reverend John Ames, a Congregationalist minister in the fictional town of Gilead, Iowa, knows that his heart condition is killing him—slowly at first, but now much more quickly. He begins to recount his memories and musings on life and faith in letters he’ll leave behind for his seven-year-old son, Robert. Robert and his mother, Lila, are a late-life blessing, evidence of grace from a God who allowed Ames’ first wife and daughter to die days after childbirth decades earlier. Ames regards his son with a watchful awe, a more careful and protective version of the gratitude with which he views the entire world around him.

If there’s one thing Ames imparts to his son more frequently than anything else, it’s an awareness of the glory of the ordinary. On one page, he recounts walking behind a young couple after a heavy rain. As the boy jumps up and grabs a tree branch hanging low above them, “a storm of luminous water” pours down and the two lovers burst into joyous laughter. “It is easy to believe in such moments,” Ames offers, “that water was made primarily for blessing, and only secondarily for growing vegetables or doing the wash.” Through the voice of its narrator, Gilead assumes a Malickian reverence for the natural and human world as a means of God’s grace and power, if one only stops to look.

Driveways acknowledges a similar holiness existing amid the familiar and unremarkable, although its subtlety requires a more attentive eye. The film rarely strays from the neighborhood street on which Del and Cody live, but it never tires of the lush, verdant trees which line it. Their impossibly bright leaves fill almost every frame that occurs outside, so much so that my strongest memory of this film is how very green it is. Amidst the rundown houses and yard sale tables, the beauty of the natural world is somehow both striking and ordinary, dependent only on our willingness to see it.

These scenes, like much of the film, are accompanied by composer Jay Wadley’s cyclical piano score. A gentle strain of a violin often joins in, sounding like breath, like slow waves. Each time I hear it, I’m filled with a pensive, bittersweet ache—a feeling that life is at once large and small, that grief and joy and pain and blessing exist on the same plane, and in the same moments as microwave dinners and cardboard boxes and bingo halls.

Although Driveways adopts this perspective, Del himself doesn’t possess the same prevenient courage that John Ames does. In fact, he often seems to be the one in need of it. “This is an interesting planet,” Ames writes. “It deserves all the attention you can give it.” Del comes to a similar realization almost too late.

His friendship with Cody begins to grow. The heavy loneliness that often follows both of them begins to abate. Rather than sell April’s house, Cody and his mom decide to move in, and in Cody’s mind, the most important part of this decision is getting to be neighbors with Del forever. But when he runs excitedly up the porch steps to tell Del the news, he soon finds out Del is moving, too—his daughter wants him to live in a nursing home near her in Seattle.

So, the young boy and the old man sit on the porch steps one last time, as Del tells Cody about the last trip he made across the country: a hitchhiking adventure with his buddy, Eddie, after the war. The same trip where he met Vera, the woman who would become his wife. He recounts the best parts of his life—writing love letters, getting married, becoming a father—as well as the wasted ones: “40, 50 years just disappeared in there somehow.” It’s a scene made doubly poignant by the fact that Driveways was one of Dennehy’s final roles before passing away in April 2020. Del’s simple elegy for the smallest moments of his life becomes a eulogy of sorts.

Dennehy approaches the scene slowly and simply, pausing between each phrase:

“I wish me and Eddie was just leaving…this morning. I wish we could do that whole trip all over again, maybe be a little more deliberate this time, drive a little slower, take our time, take a good look at stuff, really…really see the country.”

Del’s wish is tinged with wistful regret for the things he failed to see, and the life he let pass him by. He intends it as advice for Cody, quietly urging him to live his own life purposefully, to avoid the mistakes he himself made. It might be too late for Del, but it isn’t for Cody.

Though if the preceding hour of Driveways is any indication, both Del and Cody have already started to notice all the ordinary and overlooked things around them—beginning with each other. In a world that often forgets or ignores them, Cody and Del see each other. Del is the first person Cody invites to his birthday party, tucking a hand-drawn invitation into his newspaper. When none of the neighborhood kids show up, Del brings him to the VFW to celebrate instead, assuming correctly that he’ll be more comfortable there. Their friendship revolves around noticing and knowing, and, in turn, being noticed and known. Each sees in the other a worthiness he cannot yet see in himself.

Del’s final monologue—emblematic of Driveways as a whole—and John Ames’s letters to his son in Gilead, compose a central thesis of sorts, the lasting instruction both men most wish to pass on to their younger counterparts. Both equate living—in the fullest and most fulfilling sense of the word—with truly and deeply seeing the world around you.

On the porch steps, framed by the open doorway, a man at the end of his life looks over to a boy at the beginning of his. The boy moves closer, leans against the old man, and puts his arm around him. For one last time, they take in the world together.