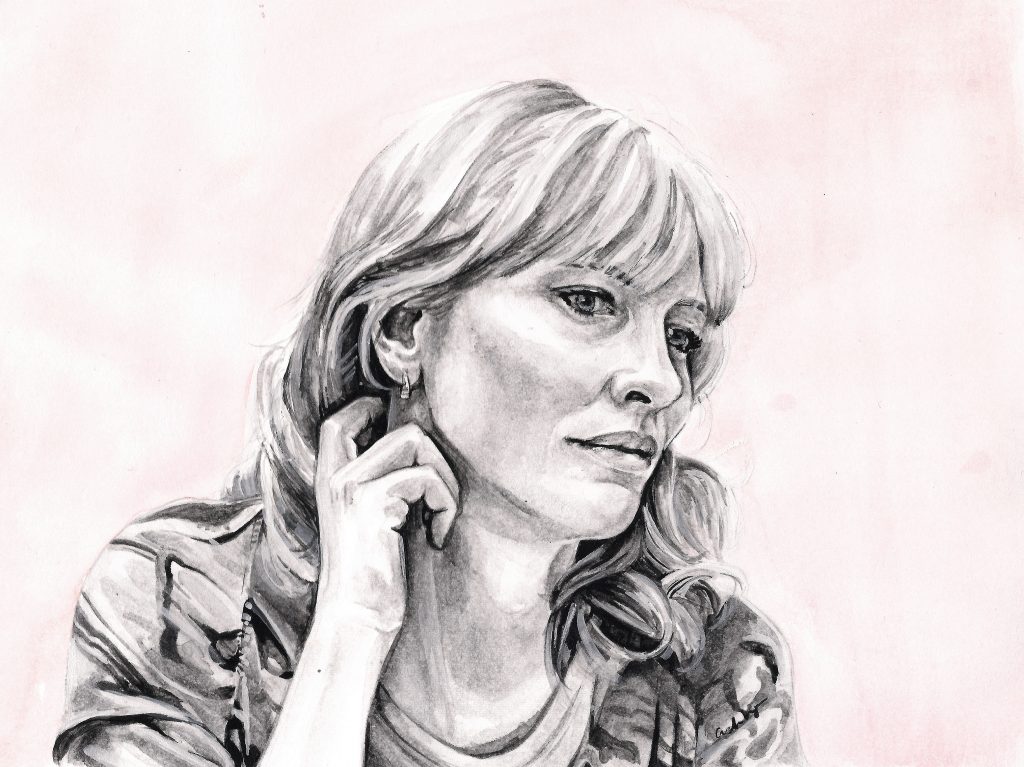 illustration by Brianna AshbyI wanted to laugh out loud the first time I met Lucas. I walked into my office on the first day of my new job, and there he was, his back to me. He turned. His eyes were the color of a clear dawn sky. His jaw and cheekbones belonged on a billboard advertising men’s cologne. A pearl-snap shirt was tucked into the slender waist of his Wranglers. The tan skin on his ropy arms glowed. He offered his hand to shake; his calloused fingers were warm against mine. White and even was the smile he beamed at me. I dumbly gripped his hand as verse six from the Song of Solomon came unbidden to my mind:

Thy teeth are as a flock of sheep which go up from the washing, whereof every one beareth twins, and there is not one barren among them.

He doffed his straw Resistol and made a little bow. His hair, smashed into a Fred Munster fringe by the stained band of his hat, was the one flaw that drew me back from the brink of utter speechlessness. “So pleased to meet you, Miss Sara,” he drawled. I stifled a giggle of the girlish kind. There I stood—a sophisticated feminist of thirty-four years of age, engaged to a kind and talented artist—shivering in the storm of a young stranger’s beauty. He was the embodiment of every mythic cowboy I’d ever seen. He was James Dean. He was the Marlboro Man. He was John Wayne. He was Brokeback Mountain, and I suddenly wanted to climb his peak and throw myself off.

I feel a kinship with memoirist Barbara Covett (Dame Judi Dench). Notes on a Scandal are her notes, written in elegant longhand in countless leather-bound journals. Her wry, smoky voice frames each scene in the film. Though I don’t always agree with her unkind judgments, I envy her barb-like wit. I wish I could notice as well as she does the particulars of class and how it determines the behavior of those around her. She sees right through the pretentions of Bathsheba Hart (Cate Blanchett), the well-intentioned, hapless new art teacher at their London public school. A glance at Sheba’s outfit is all it takes. “Artfully disheveled today. The tweedy tramp coat is an abhorrence,” Barbara sneers. “It seems to say, ‘I’m just like you.’ But clearly she’s not.”

That much is true. Sheba, like her biblical namesake, possesses the kind of beauty for which kings sacrifice fiefdoms and sons. Her translucent skin emits a soft light that brightens even the dourest classroom. She’s a fairy tale: hair of spun gold, limbs of willow, a voice “pure…as if her mouth were empty and clean.” Next to her, pinched little Barbara and the other dumpy teachers barely come up to Sheba’s shoulders. Wattled and waddling, they are all Muscovy ducks compared to swan-like Sheba. “She has certainly rippled the waters of our stagnant pond. They flock to her,” Barbara observes as her fellow instructors use any excuse they can to sit next to Sheba at lunch. Solicitous, they touch her in passing. They compliment her on the filmy tops she likes to wear.

Barbara holds herself above what she sees as the rabble around her, but she, too, is not immune to beauty’s insidious pull. She finds herself waxing poetic on Sheba’s complexion, which she likens to “…a white peach. One can almost see her veins.”

My own peach is a duskier one, though no less alluring. For years, I have prided myself on questioning culture’s ideals about beauty—that it belongs wholly to those who are young, white, straight, and thin—only to become a cross-eyed idiot every time Lucas approaches my desk. This feels like a personal failing to me.

I resent how our culture has taught men to gaze at women’s bodies with entitlement, dividing their wholeness into breasts, thighs, legs: lumps of pretty meat to use and eat. But now I know a little of how men feel, for I, too, have found myself objectifying my coworker with my gaze. I’m not proud of it. Lucas wears the top few buttons of his shirt open, and there, beneath the hollow of his throat, I can see a tuft of hair that hints at a thick swath covering his chest and belly. I have to consciously avert my eyes from that tuft, because if I don’t, I will stare at it and yearn to touch it instead of listening to him ask for a travel application. “Eyes up,” I chide myself, but moving my gaze directly up to his is just as dizzying. His eyes are so blue. When he looks back at me, words turn to marbles in my throat, and I have to swallow them down, hard. The only time I indulge myself is when he turns his back on me. In those stolen moments, I can take in the wondrous line of his thin hips. I toe the edge of a precipice with each furtive glance, and I imagine, as Björk does in “Hyperballad,” “what my body would sound like slamming against those rocks.”

I don’t know why I long for Lucas when I’m so happy to be engaged to the man I love. I fret over this often. It’s unfair. Why can’t I have such lustful feelings for my fiancé? He’s still the same handsome guy I fell for back in the first frantic months of our courtship. Our relationship has since deepened into an abiding, comfortable intimacy; we laugh at each other’s farts and baby talk to the dog. I worry I take too much advantage of this intimacy when I tell him about Lucas. I fear I am being cruel, but I also fear that if I keep my lust to myself, it will fester and metastasize. He just holds me and tells me I’m being too hard on myself. “You’re only human,” he says, his hands gentle on my neck and back. “It’s ok to want other people. Just let them alone, and keep telling me the truth.”

Easier said than done, at least for Sheba Hart. Like me, she too teeters on the cliffs of desire, though she has it much worse than I do. Her obscure object is Steven (Andrew Simpson), a fifteen-year-old student with a Scottish burr and freckles. After scoring a goal in the schoolyard, he whips off his shirt and points at her. This one’s for you, Miss. It’s difficult to tell if he’s referring to the goal or his sculptural half-nakedness, but the effect is the same on Sheba either way. I recognize the pain in her eyes: longing, shot through with resentment. As we age, we must sweat and diet and discipline ourselves into beauty, but the young miraculously are, like Venus emerging from the sea.

Long ago, she was Venus. We get a glimpse of a younger Sheba in an old picture she shows to Steven. That girl, red of lip, dark of eye, big of hair, stood out from a sea of other students in her professor’s class. Richard (Bill Nighy), her senior by decades, sacrificed his kingdom—a marriage, two children, possibly tenure—for her. They married, and the intervening years have transformed that punk goddess into the mother of two. Richard has become an old man. Her dreams of artistic renown have shrunk into a condescending plan to bring art to poor students like Steven. Instead, she brings her body and her hopeless longing and a Siouxsie Sioux record. She brings her whole life. She lays it at Steven’s feet, knowing full well everything she may lose. He, a child, a god, is cruel in his innocence. Of what worth is a life to immortal youth?

We all must walk that edge between what we have and what we want. There, on the lip of desire’s canyon, we can cling to the rim, or we can cast ourselves down. But when? For what? If we hold on for too long, we risk becoming like Barbara. When she was young, admitting her attraction to women could have wrecked her life just as surely as Sheba’s dalliance destroyed hers. Thus Barbara, ever shrewd, bound her desires tight within her journals. There, her barred love grew twisted and deformed like the stunted pines that live on unforgiving peaks. Longing turned to delusion. Fondness soured into obsession. She couldn’t let go. In risking nothing, she lost everything.

Yet falling headlong into the abyss must not be done lightly. Poor, privileged Sheba, so accustomed to getting whatever she wants, never learns what truly matters to her. She flings herself at her professor, at her student, at ceramics, at teaching, even at her worst frenemy, Barbara, and all of it leaves her sobbing silently in her kitchen, all too conscious of the disappointment in her wake. When Richard discovers her affair with Steven, he of course asks why she did it. “I DON’T KNOW!!!” she howls, and she soon flings herself once more, this time to the camera-wielding wolves at the door. “HERE I AM! HERE I AM!” she shrieks at the paparazzi, a goddess transformed by hubris into a screaming gorgon. She failed to gauge the height of the cliffs. She dared to dance too close.

My boss invited us all to a party at his house. For a few hours, gallons of beer and piles of barbeque thinned the lines between employer and employee. We flirted and chatted under a soft summer sky. Someone brought a boombox, and instantly, the empty garage became a dance floor. I danced my first two-step.

I did not dance with Lucas, though I wanted to. Two-stepping is far from the bump-and-grind of da clubs I once frequented; even so, I was uncomfortable crossing that line. I watched as he partnered up with another woman my age. She was a practiced dancer, lithe and quick. So was he. They spun across the floor, twisting and fading into each other like flames in the night. White-hot envy seared my brain. I clutched my beer a little harder and took a long drink.

My jealousy cooled into wistfulness as I continued to watch them. She matched him step for step, their limbs entwining as he caught her in a graceful fall that made me ache. They were beautiful together, as were the smells of charred meat and mesquite, the colored lights bobbing in the evening breeze, and the laughter all around me. I couldn’t tease one apart from the whole. Tears pricked the corners of my eyes. I’m a part of this, too. This whole. This beauty. Sometimes, I can see things for what they are. I can also drink one too many beers. It was time to go home.

I went to find my fiancé. He stood at the edge of the driveway with some friends of ours. They were admiring the mountains at the edge of town, burning rose and scarlet in the light of the setting sun. He smiled and drew me in for a kiss.

“Will you look at that?” he grinned and wrapped me in his arms. “Aren’t they beautiful?”

“It’s good to be alive,” I replied. That’s the only answer I have to that question.

Gray Hendryx is a writer on the move between West Texas, New Mexico, Arizona, California, and Peru. Next year, she’ll end up in Pittsburgh with her beloved husband and chihuahua. You can follow along with her travels at Material Spiritualist.