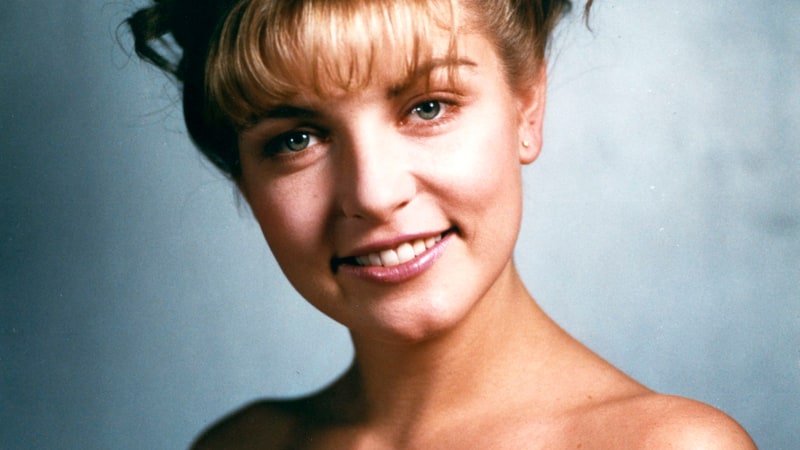 That Was Laura, But She’s Only a Dream

“I have seen more death than I have seen life. Sometimes even the most tired clichés apply. I believe I am merely living my life in order to die.”

Beauty is immortal, and provisional. Specious, and sensational. Rare, and therefore suspect. Donna Tartt wrote of the condition: “Beauty is terror. Whatever we call beautiful, we quiver before it.”

In ancient Greece, to be beautiful was to be wise, and thus good. They had a phrase for it: kalos kagathos. A quality translated to marble, bronze, terracotta, and the Neoclassicist pottery that told stories of Achilles and Penthesilea, of athletes and maenads and muses. The Greeks had another phrase to describe Pandora, the world’s first woman: kalon kakon, or “the beautiful evil.” Female, or: of malicious origin.

Laura Palmer—a woman; beautiful, evil—is a Gen X Pandora in saddle shoes. Ethereal in the headlight of her boyfriend’s motorcycle, terrifying as a cackling Black Lodge specter. The creation of Mark Frost and David Lynch for their landmark television series, Twin Peaks, she was its most salient marketing hook. Dead before the show begins, her corpse—Persephonic, with river stones like crystals in her hair—sold the mystery premise: Who killed Laura Palmer? Fans wondered, and some still wonder. Twenty-five years after the reveal, the optics of her death still shift with Twin Peaks: The Return, the show’s sequel series, where her origins transition from a casual victim of male ultra-violence to something nuclear, prophetic, mystic.

She has also shifted in essence from a silent dead girl to the distillation of Lynch’s most operatic revelation: that to harness beauty, with its absolute visibility, is to tell the fables of our world, the horror and the fairy tale. Laura is both, her story sad and rapturous, but always auspiciously human. She is the great turning point in Lynch’s oeuvre. Fire Walk With Me, the cinematic prequel to Peaks, charts Laura’s final days in a brutal, agonizing fashion. It is the first time Lynch is so firmly woman. The camera loves Laura—played by the miraculous Sheryl Lee, who should be Meryl Streep-famous—as she sips airplane bottles of vodka in bed and pulls on her stockings, or as she drapes her body over an armchair and proclaims, “Night time is my time.” In her and the film’s final moments, as her soul transfers from Earth to the transient Black Lodge, her face fills the frame and her emotions—melancholy, tearful relief—unspool. A Lynchian lightbulb goes off. To be beautiful–as Laura was—is to reflect, and at times possess, the inherent evil of our natural world.

David Lynch, who learned through Laura both how to talk about women, as well as how women are maligned by the cruelty of men, infused his next three films with this ideological renaissance. In Lost Highway, Patricia Arquette is a femme fatale of duplicitous origin, both Reneé and Alice depending on the scene. Trapped in a rat-a-tat of identity, her most potent line, as Alice, comes when Pete (Balthazar Getty) tells her how much he wants her. “You’ll never have me,” she replies. She (they?) are not the deepest or most knowable of Lynch’s feminine creations, but still evolve his understanding. They are certainly more complex than the women in his first film, Eraserhead, who have names like the Beautiful Girl Across the Hall, Mary X, and the Lady in the Radiator.

If Eraserhead, a Kafkaesque fever dream about antagonistic fatherhood, is insular Lynch, then Mulholland Drive—his best film—is an explosion of illusions long fostered. The interiority of women is as vital to Drive as its neo-noirism. Naomi Watts and Laura Elena Harring, like Arquette, play dual roles–or rather one role with divergent presentations. They prey on one another in ego-stroking Hollywood, where there are only two options: Destroy each other or be destroyed. The men around them have anxieties, but the women’s are of body, and how performance is key to survival. As Watts’ Betty famously intones, “It’ll be just like in the movies. Pretending to be somebody else.” Womanhood is predicated on make-believe.

Inland Empire, Lynch’s most mystifying film, furthers ideas laid bare in Mulholland Drive, of Hollywood and identity and the horror fantasy of vanity. Laura Dern plays  Nikki, who’s lost in a head maze of mental fragility, her identity calcifying into that of the role she’s playing in a film, before ricocheting back to her old self. It’s almost impossible to say what Inland is about; Lynch had no script for the film, only wrote it as it went along, and neither Dern nor her co-stars knew what they were performing. What unfolds is something anthropomorphic: Animals, music, and electricity are all tenants of Nikki’s madness. But her violence and hatred never feel kalon kakon. She is instead sympathetic and sad. Illusions distort her face, but we start and end with natural, angelic person.

Nikki shares much with Laura Palmer. Both are victims of child sexual abuse, both governed by cruel men (Nikki’s vicious husband and Laura’s father, who’s possessed by the evil B.O.B., a physical representation of male danger). It makes sense that after discovering Nikki, or at least attempting to, Lynch would think of Laura, and miss her.

Twin Peaks: The Return opens with Laura Palmer’s face, still preserved in her high school prom photo, before it fades into trees, which themselves fade into the Red Room of the Black Lodge, where Laura’s spirit—in whatever inter-dimensional form—now lives. It’s an inversion of the original series, where Laura’s photo lingered in the closing credits. Lynch, along with Frost (who is also responsible for Laura, saying in interviews he based her on real-life murder victim Hazel Drew) have refocused their narrative.

In The Return’s already-infamous Episode 8, we learn that Laura was plucked from the stars and sent to the earth as a cosmic protector. This miffed some fans, as it mythologizes her life and death, instead of letting it exist in the toxic chasms of reality. But Lynch has always blurred the line between recognizable and fantastical, allowing either interpretation to exist, because every possibility is of use to his vision—which he never explains, per the function of his elliptical method. “People go into a world and they have an experience, and they bring so much of what makes them react,” Lynch told Vulture in 2014, around the Criterion release of Eraserhead. “It’s already inside of them.”

Laura, whether she’s a godlike force or a mortal victim of her poisoned surroundings, is both the Fire Walk With Me Laura and the Episode 8 Laura, just like Leland Palmer is both her abuser and a man possessed. Lynch–a fan of The Wizard of Oz, the iconography of which he laced into Wild at Heart–works in dreamscapes. Reality vs. surreality. The things we imagine and the things we are.

Fire Walk With Me is Laura in her reality; the Laura so many young women know and are. It’s a brutal and unkind world she lives in, where high school is a protective shell from the cruel normalities of female development. Her beauty is a poison for so young a person. It follows her, walks with her—fire walk with me—straight into hell. Hell is her cocaine addiction and her nights at the Roadhouse. In one Dante-esque scene, her innocent best friend Donna follows Laura’s nightly ritual into the molten-red Pink Room, where women dance topless in a haze of smoke and do whatever else men pay them to. Laura, drunk and high, slithers her naked body over a male stranger, and fools around with him in a booth, lost in the ecstasy of oblivion, forgetting for this moment that she is 17-years-old, that she has homework in her backpack, that she’s the quarterback’s girlfriend. Forgets also that her father sexually abuses her in her own bedroom while her hapless mother lingers mindlessly in the kitchen. The Pink Room is a destabilizer, like a noxious gas. All of that goes away.

But when Laura spies Donna taking after her—lying on a table while a man kisses her neck and bare breasts—she comes undone. “NO!…NOT YOU, DONNA.” she screams, rushing to her friend and covering her up. Like she’s finally seen herself, projected. This is what you are, the product of all they’ve done to you. This is what you can’t escape. And she never does.

Twin Peaks: The Return, then, is Laura the immortal. It’s impossible to tell what Lynch is saying with this present-day iteration of Laura. We see an older version of her in the Black Lodge, while Agent Cooper is trapped there. He asks this aged version if she’s the real Laura Palmer, and she says that she is.

“But Laura Palmer is dead,” he replies.

“I am dead. Yet I live,” she says back, in the Lodge’s trademark backwards speech.

And indeed she does, for she haunts The Return, as a glittering orb in Episode 8, and elsewhere as visions in a doorway, the sky. A framed photo of her prompts high school boyfriend Bobby Briggs, now a grown man, to burst into tears. “Brings back some memories,” he says through sobs.

Lynch is still discovering Laura, still learning from her, still possessed by her. She is his kalos kagathos. Physically beautiful, tragically beautiful, but also beautiful in her soul—serving food to the poor, tending to the disabled Johnny Horne, displaying grace and love when the world isn’t tearing her apart.

The Return is not just an accessory to her story. It’s a necessity. A clear marker of the creator who saw her from one idea to another, growing her through his own understanding of how the world maligns women, hates them, loves them, abuses them, then forgets them.

He won’t let us forget her.

When I think of Laura Palmer, I recall the song, “Laura,” from the 1944 Gene Tierney movie of the same name, and wonder if Lynch had it on his mind.