Sitting Down after a Hurricane: On Songs from the Second Floor

I watched Roy Andersson’s Songs from the Second Floor for the first time when I was 16. It was handed to me by the brilliant older couple that owned the neighborhood video store, where I was mostly remembered for my exceptional late fees. They saw that I loved movies and took me seriously, setting up an impromptu film school from behind the counter whenever I stepped through their doors. Some evenings, like this one, they were adamant in their selections for me. So, in the dark of my old room, on a rickety analog TV and DVD player, I sat and stared for what felt like hours, though it was actually less than two, at something I couldn’t even begin to understand. I remember men and women in business attire marching the streets, whipping each other in unison, somewhere in the background of a scene. I remember a moment from the inside of a painting. I remember crucifixes, stacks of them. There was bleakness, humor, and silence. When I returned the movie the next day and the couple asked me what I thought, I could only nod, wordless and wide-eyed. They nodded back at me, pleased.

I have not seen this movie in nearly eight years, and sitting down to watch it again, I wonder how my vague recollections will fare. The images from the film that survived, somewhere in the recesses of my mind, often resurface without context or prompt, evolving and devolving with time. This second viewing, I am a bit older, and hopefully somewhat wiser.

The men and women on the streets are demonstrating, a flagellating mass, rendered as the background of a scene only at first, until its characters are forced to acknowledge it, matter-of-factly. The painting is titled “Nighthawks” and we are, in fact, inside it. The crucifixes are stacked because they are being thrown away, no longer necessary, no longer bankable. There is bleakness, humor, and silence, but there is also, occasionally, music. The stillness of it is not too unlike the images retained in the recesses of a memory, somewhat reminiscent of what Chris Marker attempts in La jeteé though, of course, it is not referencing this directly. This is not a film about memory, but rather a film with the capacity to become ingrained within it, due to its patience and diligence.

Songs from the Second Floor creates a world that is not so far from our own. It features the familiar grays and concrete landscapes of most dystopias, but this is not a dystopia born from a caricature of a villainous regime, but from our own familiar system. It is an apocalyptic vision of the world, no doubt partly inspired by the anxieties of the new millennium. It is the result of a capitalist society, a world of businessmen and women, surreal and absurd only in execution, never in reasoning.

Is it cheap to write about the weather, even when it’s impossible to ignore? It’s been a few weeks since my second viewing of Songs from the Second Floor, and I’m writing now from the aftermath of Hurricane María. Ironically, my mother’s apartment, where I am staying and first watched this movie, is on a second floor, but this is also the only reason it is habitable—all the first floor apartments were flooded and many of my neighbors lost everything. Stepping out into the wreckage, I am reminded of Andersson’s careful landscapes, somber, dull. My town is bleak, its few remaining trees devoid of leaves, great but barely moving, 15-foot high skeletons in a wasteland. We get up at 3 in the morning, breaking the established curfew, and make day-long queues for gas, for food, for ice, for cash, joining Andersson’s endless traffic jam. There are no businessmen demonstrating, but they are meeting somewhere, vultures picking at our rotting remains, sacrificing entire impoverished communities instead of a single little girl, hoarding fuel, an empire that owns and ransacks us while withholding help and goods. Businessmen, all of them, even our leaders, selling us crosses and promises. Looking at the debris that surrounds me, even though I am clearly among the luckiest, the least affected, it becomes even more obviously apparent that Andersson was portraying a dystopia that could easily await us. I imagine that Andersson’s world, like my own streets, smells of death.

Capitalism is at the root of the poisoned society presented in Songs from the Second Floor. It is telling that such a venomous and comic portrayal of the costs and endgames of a capitalist society was created by the man who Ingmar Bergman once called the greatest TV commercial director in the world; a man who created art for capital, perhaps capturing the consequences of his own actions. Though it was a force of nature that devastated our island, our current state of emergency is a direct consequence of our political and economic status. We are stuck with an unpayable debt and crushed under the heel of the U.S. Empire, our current colonizers, where businessmen reign supreme. 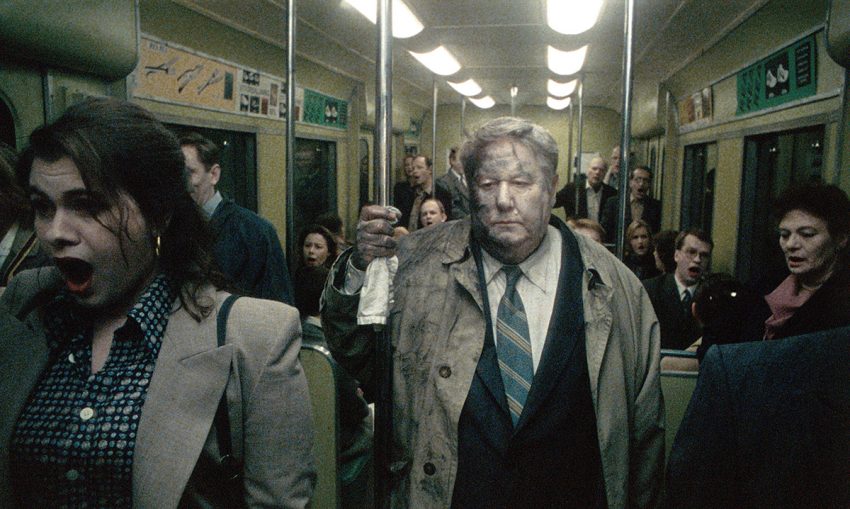 The film also presents us with a poet. The poet is mad. The movie opens with the words of César Vallejo, a leftist Peruvian poet, one who captured strife and humanity in verse. Vallejo’s words are recited to the poet with the urgency of a soul-saving prayer. The poet believes in words and humanity, the poet deals in artistry and beauty, in rebellion and the recognition of right and wrong. The poet does not wear business clothes or whip himself on the streets. But the poet is mad and unworthy of love, because in this world, madness is what we assign to those who dare to question, who dare to generate beauty for the sake of anything other than capital.

This film is not only inspired by, but evokes and understands poetry. I remember the images from Songs from the Second Floor in the way that one remembers the lines in a poem, or perhaps in a song. The movie is lyrical—not specifically or even mainly in what is said, but in how it is told. It is a patient, somber melody with the subtlest hint of laughter, maybe an occasional cackle, which would sound dark except for how it lightens the mood, giving us permission to laugh as well. The film progresses quietly for the most part, nearly unmoving. Each scene, each one its own frame, each one its own verse. It juxtaposes the details of its images like lines in a poem, gradually unveiling information from the ones that preceded it. David Lynch does something like this, too, but Andersson is far more theatrical in scope. He creates his backdrops like grandiose stages, 46 of them in all, their details moving slowly, arising, showing themselves: the beauty in the midst of debris, the dead rising to meet each other.

We are rarely close to the actors’ faces. We watch unmoving, from afar, as detached as possible. Andersson pulls us back, paints them pale and garish, characters from a Beckett play, so we can laugh at them. They’re not us, but almost. It’s the opposite of Italian neorealism, the opposite of the decolonized cinema of Ousmane Sembène or Fernando Solanas, the opposite of what Vallejo did in writing—those who placed their eye firmly unto their people. My people are not the garish, white-faced somnambulists indifferent to life and death. We are, despite everything, still alive, not merely surviving.

Writing about cinema feels trite after a disaster, and perhaps it is, but once survival is no longer a personal concern, there is admittedly little to do after a hurricane. It seems pertinent to consider memory after so much has been lost, and in a sense, cinema itself is about memory. Movies are snippets of reality in motion, saved, narrowly avoiding oblivion. Without intervention and by successfully preventing decay, the past can easily be revisited, frozen on celluloid, while we, the spectators, are the ones who change, and so we change what movies mean to us with time. What has been lost cannot be revisited, but cinema—and poetry, and photographs, and art—offer us some respite.

Songs from the Second Floor is a stunning reprimand declared 46 times. All the way from Sweden, 17 years ago, this movie—which for a long time seemed like the most interesting of dreams, a strange and gorgeous memory tucked away—is now the closest parallel to my current reality. But Andersson punishes the businessmen, mocks them, makes them fleshy, flagellating fools, and the thought is almost hopeful, because at least they are whipping at each other and not at the poet, not at us. The film opens with the line, “Beloved be the ones who sit down.” After a hurricane, once the water has been cleared and your loved ones have been located, once the errands have been done and you are safe and sound, there is little to do but wait for a little bit of normalcy.

So, we sit down, perhaps we write, and we trust we are beloved.